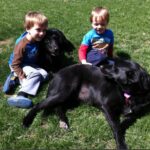 Our beloved Phoebe made it to her 13th birthday recently. She enjoyed her last Christmas, and even saw the first day of the new year. But on January 1, liver cancer was discovered, and we had to say goodbye.

We adopted Phoebe (and her brother Gus) from CILRA in early 2008. We went to look at one puppy, but they were there together and we couldn’t bear to choose only one. Phoebe came right up to us, showing herself to be happy and confident. Gus timidly watched what was happening, and seemed to already be so dependent on his sister. He was shy and quiet and gentle. So, two fuzzy black pups came home with us. Oh, the fun they had. The two of them were a perfect pair–soulmates and best friends. They were our practice twins, before two human boys joined the pack the following year. And when Phoebe and Gus met those babies, they accepted their new roles with joy. They were protectors, lying next to babies wherever they slept. They were constant friends, watching as babies played on the floor or (score!) dropped food from highchairs. A little boy sitting on you? Wonderful. Listening to the tales of Clifford again? Amazing. All going for a ride together somewhere? Sublime. Grandparents lived just a mile away; visits there were frequent and a little slice of heaven every time. When the boys began to go to school, the dogs eagerly watched for the school bus to bring them back. If we were picking them up at school, well, the dogs would just ride along so they could help spot the kids (and get some attention from the teachers). Sometimes, Phoebe and Gus would escape outside our yard together, and couldn’t quite seem to hear us calling them back, as they enjoyed their little freedom spree together. As boys and dogs grew, we could all go on trips together. There were stays in cabins and many adventures in the woods. This was life for about ten beautiful years. Then, Gus died suddenly of acute pancreatitis. That was a gut-wrenching loss, and one that we were not expecting. We were all so upset, and we worried that Phoebe would not survive her grief. We began to consider whether she would accept a new brother in her life…

Our family veterinarian suggested we get a puppy, so Phoebe could help “train” him. Little Leo joined the family, and he was more than willing to obey this gorgeous goddess whom he worshipped. He thought Phoebe was just as beautiful and grand as we did, and he brought her so much joy. Once again, there was someone to go outside with, someone to run to the windows with, someone to eat meals and snacks with, and someone to be the constant loving presence that she needed. Leo is sweet, and easy-going, and we are so grateful for the balance and friendship he brought to her final years. They would wrestle together (until she told him they were done). Then, when Phoebe’s legs weakened, Leo adapted to floor wrestling; she could stay on a doggie bed, and he would prance, bounce, and “attack” around her, while she merely had to use her mouth and front legs to gently wrestle back. As she slowed down, she came to realize that she needn’t get up and race into the kitchen to get her fair share of treats; someone would bring bites to her. She definitely enjoyed her special senior status. She still wanted to go for walks, but we’d only go to the end of the street and back. Just when we thought her pace was permanently slowed, she would slyly (and quickly) slip from the yard and romp around in the neighbors’ yards, quite pleased with herself. One of her greatest pleasures was having us all home all the time in 2020. She would watch her family moving around the house, following some of us everywhere, and just taking great satisfaction in being in the midst of it all. She received so many snuggles, and would watch her growing boys with such maternal pride in her eyes–her boys.

Phoebe’s absence from our home now leaves a vast and deep, quiet loneliness. She understood us so well, could really hold up her end of the conversation, and always let us know what she was thinking. She was just a bit needy, just a bit pushy, which endeared her to us all the more. Sadly, Leo cannot tell time, and therefore may always receive his dinner late, now that Phoebe is gone. She was graceful, strong, and the center of life in our home. She was SO loved, and gave us so much in return. We will always miss her, but find comfort in the belief that she reunited with Gus the very moment she left us. We are forever grateful for the many years that she gave us all her loyalty, friendship, and love.                         — Kelly R. & Family