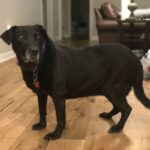 We adopted Jacie December 24, 2009 from CILRA. She passed away on November 24, 2020. She was just shy of being with us 11 years. She apparently had a break in one of her hind legs prior to us adopting her that was not set properly if at all. So she had a chronic malunion. In October she began to have issues standing and starting limping badly. We were thankful after the x-rays to learn she did not have bone cancer. However we knew there was not much we could do at her age. When we adopted her it was estimated she was 4-5 years old. Over the next month her hind legs just would not support her and we had to increase pain meds a few times. We are so thankful to CILRA for seeing how awesome she was and pulling her from a high kill shelter. She fit into our family so well. It was so hard to say goodbye to her. Our house is just not the same without our beautiful black Lab! Attached is one of the last pictures we took of her.  –Vicki C.