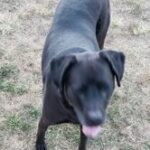 My dog, Zuke, was rescued by CILRA. His CILRA name was Rego and he was rescued with his brother, Salem, in 2014. Zuke underwent a long surgical procedure as a puppy to have his mouth rebuilt due to what the surgeon believed was trauma caused by abuse. He was almost feral and very fearful of people. But for his rescue, I’m sure he would not have had a chance at life. I’ve had him for over six years now. He has come so far from the fearful, unhappy little puppy who was absolutely terrified of school buses, large trucks, motorcycles, people and strange noises. Except for an occasional bit of PTSD he is now perfectly happy and reasonably confident. He is also one of the most loving and fun dogs I have ever known. Here’s a picture of Zukelet at the dog park, which is probably his favorite place in the world (Editor’s note: We can tell how excited he gets … his picture looks like he’s in motion!). I have never seen a dog who loves other dogs as much as he does. He has an amazing number of canine friends both at the dog park and in his neighborhood. I remain very grateful to CILRA for saving Zuke and his brother. Without that intervention, neither of them would have had a chance.   — Tom A.

Below are photos of Zuke at the dog park [and with his best friend, Rex] 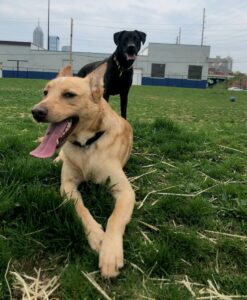 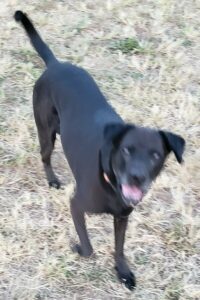 CILRA is celebrating it’s 25th anniversary! Stay tuned for upcoming announcements of how you can join in the