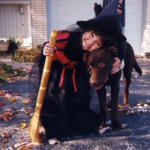 CILRA is celebrating 25 years of helping Labs and we’re sharing stories about some of the wonderful Labs we’ve rescued over the years. This story was written by Marcia R.

Some dogs are just unforgettable and Mr. Bigsby is definitely one of them. 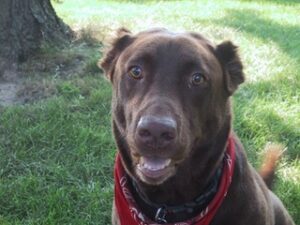 Back in 1999, a chocolate Labrador pup was found wandering the streets of a Midwest U.S. city. He would run up to people on the sidewalk, sit and raise his paw to shake. Cheerful and friendly, except that his ears, which had just been cut off, were still bleeding. A kind soul took him to a nearby shelter and a surgeon cleaned up the damage. Speculation was that someone wanted the pup to look tough for dog fights and tried to dock his ears.

CILRA soon stepped in, named him Mr. Bigsby, and put him in the care of foster Mom, Jamie. When he was less than a year old, another CILRA volunteer named Lauren found the pup his forever family in Glenn and Katie F., and their daughters Mieko, Maris and Emily. Emily, not quite five, was initially so frightened by the Lab that she navigated the house by jumping from one piece of furniture to the next. She was afraid to be on the floor with Mr. Bigsby. He soon won her over, though, and within a few weeks they were best friends. 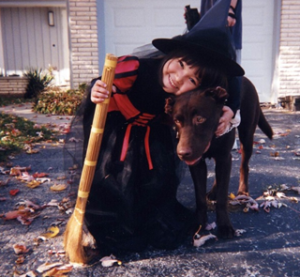 Mr. Bigsby with his best buddy, Emily, on Halloween

One of Bigsby’s favorite pastimes was taking long walks in the nearby park, next to the baseball fields. The dog had a “peculiar genius” according to Glenn. He could sniff out a baseball from 10-20 feet. One whiff and he would charge right into the brush and find his prey. During Little League season, Bigsby would find one or two, maybe even three, baseballs a day! He was a familiar sight around the neighborhood and the ball diamond, always with a baseball in his mouth, happy and eager to make friends. 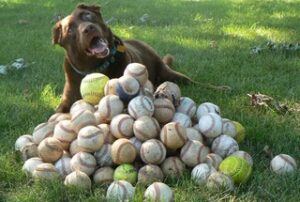 Mr. Bigsby, the Baseball Retriever, with his 2007 catch

Bigsby had a great life with his forever family. For over ten years, he watched the girls grow up and go off to college, and always looked forward to their visits home. In his later years, he lost his sight but it didn’t slow him down. He cheerfully navigated the neighborhood and kept searching for baseballs. Mr. Bigsby died of lymphoma in 2009.