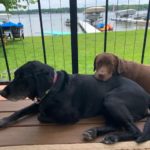 Thanks for putting us together with Polly!

We adopted Polly aka Paris, a chocolate Lab, a year ago. She came to us from a puppy mill in Iowa. She obviously had just had a litter. CILRA had her spayed, had 14 teeth pulled and put her in the good care of foster, Carol W. until we adopted. It wasn’t an easy journey at first. We were in the middle of a move and Polly had severe separation anxiety. Thanks to her dog sister, Louise and me being home with her she became more secure. Everything was foreign to her…smells, sounds, cars, commands. But from day one, her sweetness prevailed.

Today Polly has soft beds, treats, and walks but really just likes being with me. In these unpredictable times I look at her and think maybe we should have named her Patience. She’s a prime example of that. 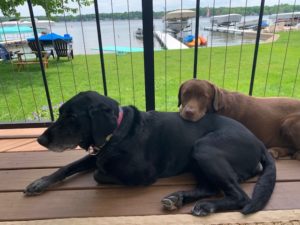 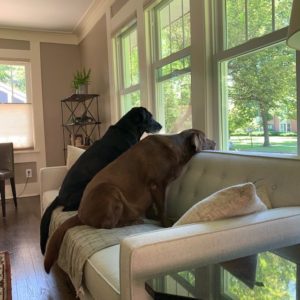 Message from CILRA’s Board of Directors: As we navigate through COVID-19, we hope you and your family have