Last September Midnight was on CILRA’s adoptable Labs website with the note that he was under treatment for heartworms. In that same month, our Ally (14 and whom we adopted from CILRA when she was 6) crossed the Rainbow Bridge.

Last January we decided to adopt again. Midnight was still there. He had finished his heartworm treatment, and Captain Midnight came to us. He was 6-8 years old. Our vet said he was closer to 8. He had lived in a pen with two other dogs for most of his life. He was fostered in a Chicago suburb and walked to do his business. That is his one quirk. He only does his business when we walk him.

Last week, he had a heart worm test and it was NEGATIVE! Now, we know that he will be with us for a while. We appreciate the person(s) who donated so he could have the treatment.

Below are some pictures. He likes to lie on a bed upstairs where he can look out the window onto the street below. Another favorite spot is in front of the storm door downstairs.

Midnight, a Lab/shepherd mix is a very sweet dog. The picture in the frame is Ally.

[Add’l comment from CILRA Board Member: “I’m still in awe over this dog, as in 2 decades of answering the CILRA email, Midnight received the most adoption inquiries that I can ever recall.”] 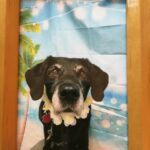 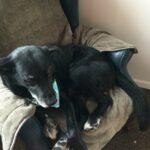 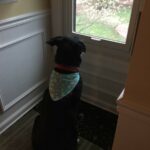 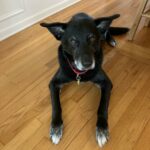 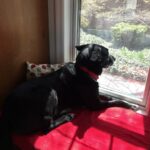 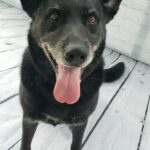