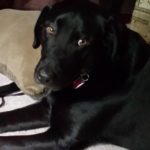 I adopted Harley in 2011 at which time he was estimated to be between 1 to 1 ½ years old. He came home and fit in with the other cat residents perfectly. Harley was such a kind, gentle, and loving dog. Everyone who met him instantly fell in love. He was diagnosed with canine Addison’s a few years after adoption but adapted to the monthly injections without problems. He passed away suddenly and peacefully on 5/19/19 from a hemangiosarcoma in his stomach.

He will be missed by myself, his grandmother, and his 4 cat brother and sisters. I will miss his loving nuzzles, soulful eyes, and most of all his ability to scare those darn firetrucks away through his primal howling (such a good protector of the house)! – Jenn N.