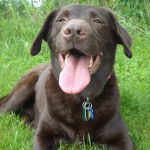 Sad news about Delilah (pictured as an 8 year old youngster and in her final days), CILRA “senior” adoptee, who became a member of our pack in May 2011. Delilah began having occasional mild seizures over the summer, but as the frequency and severity of the seizures increased in mid-September, our poor old girl suffered from a rapid decline in coordination and cognition. Delilah’s Labbie spirit was humanely released from her failing body on October 12, 2016. We have many happy memories of this loving girl: She would howl along when we’d serenade her with the song “Delilah”; she was an obsessive hunter of lost tennis balls at the dog park and laser-focused on retrieving “her” ball (on one visit, she snarled a warning to a young male pit bull and barely escaped serious injury in the ensuing attack); she was a serious and self-reliant Lab who wasn’t much in human snuggle time and hated the playful teasing (“This bone is mine! Yum! Yum!” “What happened to Squeaky Snake??!”) that our other Labs enjoyed. Every day, “Precious Pup” proved that “chocolates are the sweetest.” Delilah leaves two heartbroken parents and was welcomed on the Rainbow Bridge by CILRA Labs Leah, Sammy, Mikie, Bronco, Bandit, Raleigh, and Harley.   — Susan D. 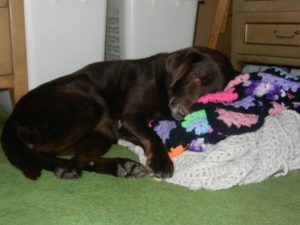 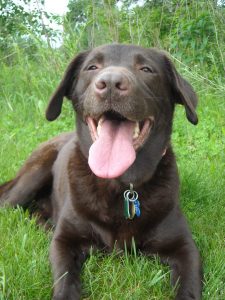