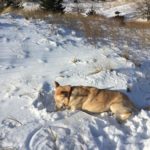 We were fortunate to have Dandy and Tank, mom and son Labs, help us raise our kids. Every dog that shared its life with us has been the best dog ever. But none taught me as much as Charlie. Charlie came to us through CILRA’s Rikki in Indy. Not two months earlier, we had euthanized Tank, the dog that saw my son through the cruelty of jr. high. Our vet came to the house because Tank could no longer walk and ate only snow. We thought it was the kindest thing for Tank. Still, I knew that living in woods within walking distance to Lake Michigan would be heaven for another Lab looking for a home and it was selfish to wallow in our grief. So one typically blustery March afternoon we met Charlie en route to IU in Bloomington. When my husband, still miserably heartbroken for Tank, met Charlie, Charlie sneezed on him. Sneezing in my husband’s face was Tank’s modus operandi of getting him out of bed in the morning. It was a sign. So of course, we put Charlie in the car.

Charlie was nuts. I mean absolutely nuts. My teenagers who had grown up with boisterous Labs were taken aback. Apparently, Charlie had been caged in a garage or laundry room for his entire life. He was 5 1/2 years old but his paw pads were pink as a baby’s bottom. When we came home, I walked him to the lake and he tentatively pawed and sniffed the water’s edge. Suddenly, EVERY strand of his DNA lit up, “I’m a LAB! I LOVE water!!” followed by wild leaping, a swirling jig and mad runs back and forth. Did I mention he barked at everything new and everything was new? He had a huge, operatic baritone bark. On leash, he lunged at people and dogs, barking wildly. I was the crazy lady at the end of the leash trying to reassure passersby that he would not rip them to pieces. He never hurt anyone but he did scare a few. He wasn’t entirely toothless, he still had back teeth but no front teeth or canines, as he had relentlessly chewed on the metal bars of his cage. It took over a year for him to develop far-sighted vision. With a solid two years of loving he evolved into a well-mannered, sweet, happy fellow who used his lovely baritone to warmly greet every person and dog encountered on his frequent walks. And that’s what he taught me. Don’t give up on anyone, the rude, the snarling, the vicious could be a neglected, starved, tortured soul who just needs an abundance of time. That wasn’t an easy lesson — at least for me. I wish we had another few years with Charlie but it was not to be. We said so long to Charlie this past December, two months after his 11th birthday. Such a good guy. He left many admirers. Did I mention he loved to sing along to Stewball? Here’s a pic of his happy place: snow and the beach. Undoubtedly, you Lab lovers can relate!   🙂   Mary F. and Family 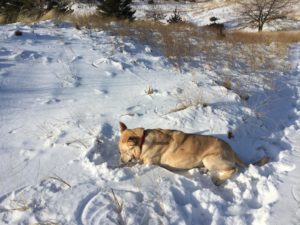