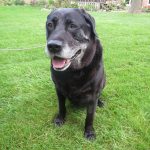 Sad news from our household: Biggie Smalls (CILRA lab “Rolly”) was humanely released from his earthly suffering this afternoon (April 8, 2017). Biggie was a gentleman, a love bug, and a real lady killer (he loved women and they loved him right back). At the time of his adoption back in November, his age had been estimated at 8 – but our vet guessed that he was closer to 11 or 12. He’d been seeming a bit indifferent to food (at 97 pounds, not his normal behavior) and was a bit lethargic of late. Bloodwork a few weeks back showed some out-of-normal-range findings, and a subsequent urinalysis revealed poor kidney function. The day before his passing, Biggie had x-rays and an ultrasound; a large mass was present in his spleen and blood was leaking into his abdomen. I was aware that Biggie’s condition could become critical at any time but until the day of his euthanasia (when he was no longer able to stand up on his own, wouldn’t try to go outside to potty, and ignored both food and water), he was living a life of luxury like his namesake rapper. In what would be our last hours together, Biggie slept soundly in his place of honor among all of the pillows in the center of our queen-sized bed, his neck nestled in the crook of my arm and his nose buried in my ear as he snored the night away. He joins CILRA labs Leah, Sammy, Mikie, Raleigh, Bronco, Bandit, Harley, and Delilah on the Rainbow Bridge. Although his time with us was brief (just over five months), his imprint on our hearts was huge. He was much loved and will be deeply missed.  — Susan D.