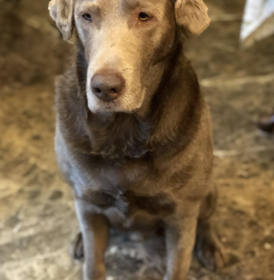 PERSONALITY
Diesel is a household guardian who thrives on protecting his people and domain. He will bark if a stranger or another dog approaches his home or yard to signal he is present and dominant. He is loyal, intelligent, as well as sociable with adults on walks. He tolerates vet appointments and procedures to a notably impressive level.

There has not been any evidence of separation anxiety, noise anxiety, or resource guarding. He appreciates the ability to come inside and outside of our home, and he has been allowed to sleep/rest upon our sofas/chairs. He has not been in a crate for the past 6 years since he has lived with me. His first two years of life were spent between two homes one of which was a farm with other dogs and horses which apparently he enjoyed. He was also supposedly duck hunting trained prior to becoming our dog. He is house-trained with rare accidents. He tolerates cats.

HEALTH & GROOMING
When I adopted Diesel at age 2 he had a laceration on his left earlobe from scratching his ear due to a fungal ear infection in his canal. He has required several courses of anti-fungal/steroid applications to both his ears every year to fight recurrent outer ear canal infections. Each time he responds great to treatment (which has been confirmed with follow up exams and cultures) but they will return. He has undergone several aspirations of both of his ear lobes due to recurrent hematoma formations as well as a right ear lobe lobe mattress suture technique to completely decrease the likelihood of future recurrences. The hematomas were due to scratching from the recurrent infections. It was suspected his infections could have been secondary to environmental allergies but no formal testing for allergies was completed. He has done significantly better with having less infections since starting his current food though. He was neutered after I adopted him at age 2. He is a pure bred silver Lab from western North Carolina. His family heritage does not have any history of hip dysplasia. His vaccines are currently up to date.

ABOUT THE OWNER
Since acquiring Diesel I have moved several times from North Carolina to Nevada to Indiana. We now have three other dogs and two young children, ages one and three. We have a single family home with a fenced in yard on one acre.

It is imperative that Diesel go to a home that does not have young children or other dogs. He would do best in a home with adults with or without older children. He loves his large yard with both grass and woods but a farm would also be suitable for him if he were to become trained.

Message from CILRA’s Board of Directors: As we navigate through COVID-19, we hope you and your family have