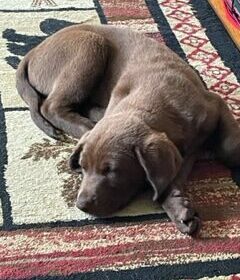 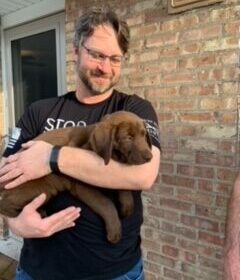 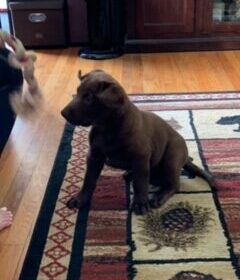 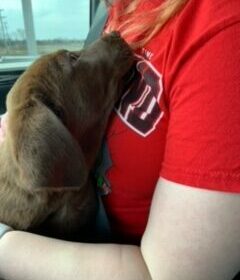 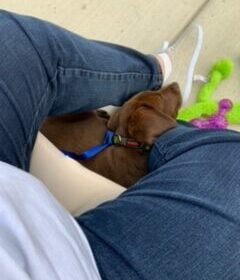 Banner is an adorable 3-month old chocolate Lab mix puppy. He is so sweet and a big goofball. His foster family would say that he’s submissive, super smart and a little bit stubborn. He will roll over and let you pet his belly and that’s one of his favorite things is belly rubs. He doesn’t mind car rides but he prefers his own seat rather than being held in the car, plus he’s getting really big! Banner is learning to go to the back door when he wants to go outside and he usually needs to go to the bathroom as soon as he wakes up from his nap. He loves being by people and does well in a crowd. He is definitely a puppy and has lots of energy, then takes a nap. His foster family sits on the floor with him and if they’re on the couch he will lay by their feet unless he is playing or finding mischief. He likes to try and play with the cat but the cat doesn’t like him. Crate training is also going well and he will sleep in it at night. Banner is being fostered in Alsip, IL (south suburb of Chicago).

The Betty White Challenge – thanks for participating!

The social media campaign to raise funds in Betty White’s name was a huge success, and benefited countless